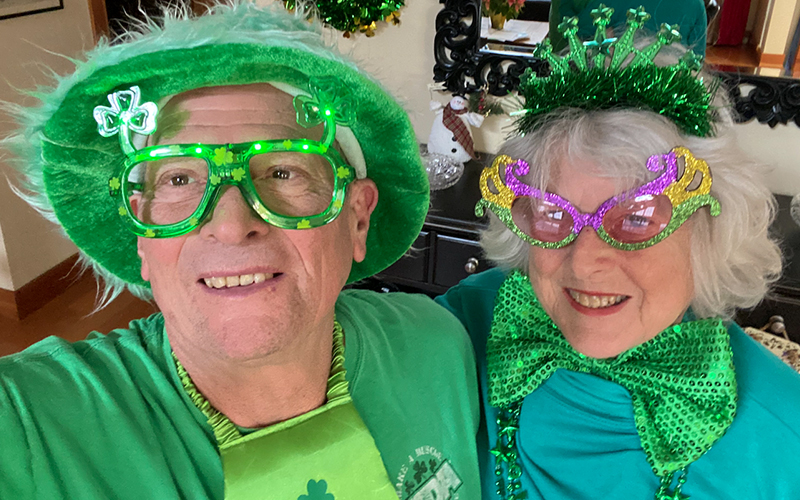 After a week of intermittent “cats and dogs” rain, the Sugarbush Racing Club sadly bid its racing season adieu last Friday, March 18. The conditions were too soft to be safe. "It has been a challenging season with trying conditions ranging from too hard to too soft, no snow to too much powder on race day. We ended with hopes high for a great season next year," club president Ray Bollerud said.

The club ended its ski season on St. Patrick’s Day by gathering at the home of Dave and Nancy Wilstein. The house was decked out with green ribbons and leprechauns and shamrocks. Club members reported that the Feast of St Patrick lived up to its reputation as a time of festivity and fun.

Forty members showed up celebrate, socialize, reminisce and share predictions for the rest of the ski year. After appetizers, the main meal, complements of chef Dave Wilstein, featured 30 pounds of corn beef, four trays of boiled cabbage, two trays of potatoes and carrots and Irish soda bread, along the many offerings of members such as scalloped potatoes, numerous salads, and homemade sauerkraut.  Finally, there was a full table of desserts, including a potato candy (looks like a potato tastes like an Almond Joy candy bar) prepared by Paula Baldwin. In the end very little was left over.

The scene was highlighted by various outfits in a full range of green. Barbara Brady set a high bar with her green hair and beads!  Several others were in close competition for originality. Kathy Koepele maneuvered through the party in a large Leprechaun top hat that dwarfed her! The best men’s outfit was John Mercer dressed in a dapper green blazer that would make the Irish proud.

While skiing is winding down, the club is already planning the summer golf outing, a pickle ball meet-up, a fall barbeque. There is discussion of a daylong bicycle ride and picnic over the summer or early fall. The club is always looking for new members who wish to join either as social or racing members or both. If interested go to https://www.sugarbushracingclub.com/ and explore.