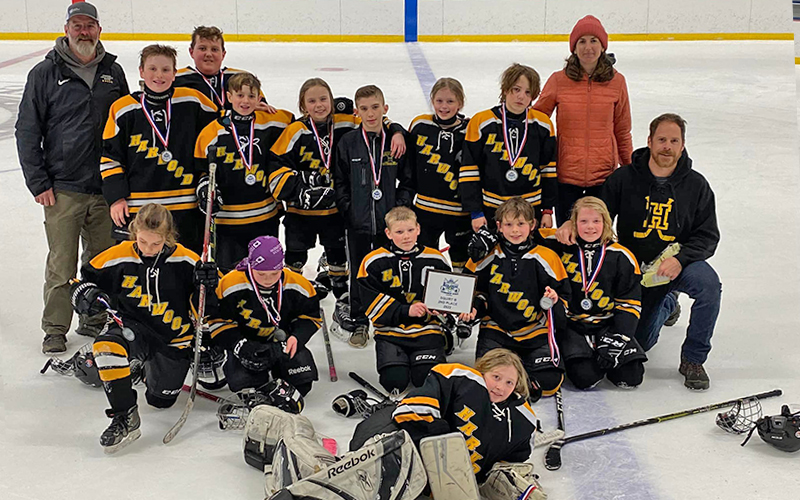 Harwood youth hockey athletes finished up their season last weekend with the Green Mountain Avalanche Tournament at Jay Peak, the Harwood U10 team making it to the championship game, falling to Rhode Island, taking home the silver.

The Harwood Youth Hockey Association board voted on a new fundraising coordinator last September and since then has successfully put on a few contests, raised funds from a seasonlong bottle drive and is gearing up for the annual Harwood hockey calcutta.

The first contest was a hockey themed pumpkin carving contest last October; the winner was Landon Weide, a Harwood youth player who carved a hockey player mid shot and won a gift bag filled with hockey necessities and a few apparel items.

The first fundraiser was a seasonlong bottle drive where youth teams went door-to-door collecting bottles, drove around the communities for Sunday pick up or collected them from roadsides. Many community members brought down their bottles to the Ice Center as well as a donation.

The U10 team won the opportunity to represent Harwood Youth Hockey during the Not Quite Independence day parade (NQUID) in Waterbury this summer on a parade float.

Next for fundraising events, there will be a Harwood Youth Hockey calcutta on April 2, 2022, followed by two summer events. A cornhole and a street hockey tournament open to the public are in the process of being worked out now with more details to come.