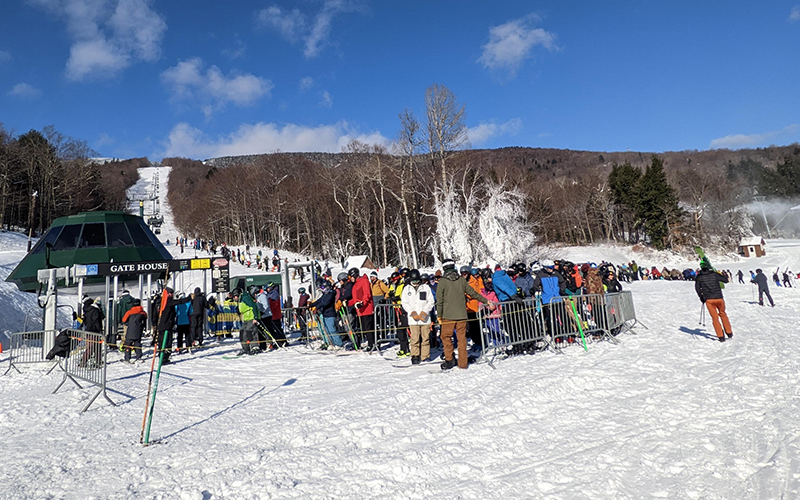 Sugarbush celebrated its opening weekend for the 2022-2023 season on November 19 and 20. With only the Gate House lift open at Lincoln Peak, lines were long on Saturday on a warm, bluebird opening day.

Technically four trails were open, though Pushover was the only option up top, opening into Lower Pushover and Slowpoke and ending up on the slightly sticky Sugarbear Road, where the snow guns were blowing.

There was solid coverage, though the snow on Saturday was crunchy in spots. With some fresh snow on Sunday, it had softened up a bit. Sugarbush’s website boasts a 12- to 24-inch base. Lift lines Sunday morning were much more reasonable. While the trails were a bit crowded, many skiers and snowboarders were just happy to get back on the slopes.

Sugarbush kicked off the season with its Big Kicker rail jam and party Saturday night at Mt. Ellen.

While Sugarbush touted it’s pre-Thanksgiving opening day, Ole’s Cross Country Center at the Warren-Sugarbush Airport in Warren beat the alpine resort to the punch, with three kilometers open on Wednesday, November 16. Ole’s was the first Vermont cross-country facility to open according to skier/writer Peter Oliver.

Owner Josh Kovanik said the open terrain was around the airport and down in the polo fields behind Wadham’s barn. He said he was able to open this quickly because he mows the grass extremely close so that with 3 1/2 inches of snow he was able to groom for classic and skating and get the trail open.

“Skiing is good. We’ve had about a dozen skiers a day using the trails. People are buying day tickets and renting equipment. They’re also buying ski packages and getting psyched for the season,” Kovanik said.

He said the shop is well stocked with Nordic gear, no mean feat given the current retail environment with supply chain issues. Currently Ole’s is open Thursday through Sunday from 10 a.m. to 4 p.m. Once the whole center is open Ole’s will be open seven days a week from 9 a.m. to 5 p.m.

At Blueberry Lake Cross Country Center, off Plunkton Road in Warren, two messages were not returned, but the answering machine message reports that the center is not technically open; however, “if regulars want to go out and go around the trails a little before we open, that’s fine.”

The message continues noting that the center won’t officially open until after Thanksgiving after an expected snowstorm on Friday, Saturday and Sunday, November 25-27.

Mad River Glen is scheduled to open December 10 or sooner if weather allows.