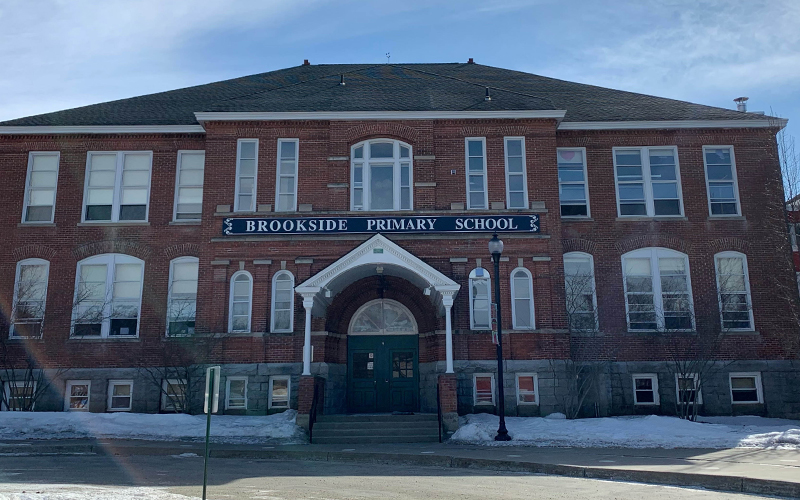 When Chris Neville began his new job as co-principal at Waterbury’s preK-through-grade-4 school last July, the first meeting on his calendar was about the school’s new name, Brookside Primary School.

The title had just been approved by the Harwood Unified Union School District Board barely two weeks prior and he and his partner co-principal Sarah Schoolcraft were charged with seeing the transition through.

Nearly eight months later, students returned from winter break to see the new name in place above the school’s center building entrance with crisp white letters emblazoned on a navy-blue background. The lettering font and scroll accents on either end mimic the style of the previous sign that bore the Thatcher Brook Primary School name for nearly 25 years.

Although the school year began with the school using its new name, having “Brookside Primary School” in big letters across the building gives the renaming a sense of finality.

But for the school, the oldest section of which dates back to 1898, this 21st-century transition marks just the latest of many chapters in a history that’s seen thousands of local youngsters call it theirs. If history is a guide, today’s students are apt to graduate attached to the “Brookside” title similarly as the generations who preceded them are attached to the name the school bore when they attended.

THE ROAD TO BROOKSIDE

In its final meeting for the 2020-21 school year, the HUUSD Board approved renaming Thatcher Brook Primary School to Brookside Primary School.

The move marked the end of a process that began in the fall of 2020 when community members and high school students researching local history delved into the story of the school’s inadvertent namesake, Partridge Thatcher, an 18th-century miller, craftsman and lawyer. One of the original land grantees of Waterbury when the town was chartered in 1763, Thatcher lived in New Milford, Connecticut. In the early 1780s, he visited Waterbury to survey and map the new territory. A brook initially named “Thatcher’s Branch” still runs along Route 100 and Stowe Street known today as the Thatcher Brook.

What prompted people to question the school name, however, was the fact that Thatcher was a slave owner in his lifetime, and the people he enslaved included two African children acquired who later married and their subsequent children were also owned by Thatcher.

Community discussions around whether a school educating children ages 4 through 10 should bear Thatcher’s name led to a request to the Harwood school board in early 2021 to rename the school. By May, students and community members weighed in on the final choice which received school board approval on June 23.

PAST NAMES TELL A STORY

State Rep. Theresa Wood was chair of the school board at the time. She explained the rationale behind the “brook” names that eventually were selected. “We wanted there to be a commonality to the names and something that did not give one town preference over the other. There were a lot of dynamics in play at the time,” she wrote to local researchers in December 2020. “Honestly, I’m not sure the committee went beyond thinking about CBMS and TBPS names as anything but waterways. They were not being named for people, but for the brooks that ran close to both schools, something that both buildings had in common.”

Crossett Brook Middle School opened for the 1997-98 school year and Waterbury’s school from then until 2021 was Thatcher Brook Primary School.

But even that change was not the first in the school’s history. In 1965 Harwood Union High School was built and Waterbury students in the fall of 1966 shifted to the new facility. With ninth through 12th graders gone, what had been Waterbury High School on Stowe Street was then renamed Waterbury Elementary School.

Local historian Skip Flanders explained how the school’s middle building section was the first to be constructed and opened in 1899 “as the new high school replacing the old school that sat in front of Hope Cemetery.” That smaller, wood-framed structure was moved to Elm Street where it’s had many uses. Today it is the Prohibition Pig brewery.

In 1913, a second building was added to the left of the original, and the Civil War monument was erected in the front schoolyard. The final structure closest to High Street was added in 1936. Together the three school buildings eventually served as the town’s graded school and high school until 1966, Flanders recounted.

The latest process to put the new name into everyday use has unfolded this school year. A small banner with “Brookside Primary School” printed on it was hung for the start of the school year in late August. Meanwhile, school leaders met with town officials about changing the large sign on the building, itself the result of a zoning process in the late 1990s. The decision to maintain the new sign in the same spot, same dimensions, without altering the historic building would satisfy requirements, explained Schoolcraft.

Eventually, the new sign was ordered to be made by Wood & Wood Sign Systems in Waitsfield. Schoolcraft said the final charges have not been tallied but the total cost should come in under $4,000.

It was completed recently and after several dates to install it came and went with postponements due to weather, conditions were good to mount it last week.

Two staff members from Wood & Wood handled the job on Thursday using a lift to reach the spot over the center entrance. The sturdy wooden “Thatcher Brook Primary School” sign would remain as the backing for the new sign, explained Erik Joslin from Wood & Wood.

The new sign is 36-feet long and 2-feet tall. It’s made of a dense 1-inch thick polyurethane foam that’s lightweight and durable. It was manufactured in three pieces, each mounted to the original signboard using stainless steel screws painted to blend in with the surface of the sign.

MOVING FORWARD, LEARNING FROM THE PAST

Schoolcraft and Neville said the project to create and finally install the sign marks a milestone for the school that they hope the student body and larger community can celebrate later this spring. Given the ongoing COVID-19 pandemic with restrictions on gatherings, they have not yet scheduled any ceremony to commemorate the name change.

Now six months into the school year, staff and students are growing accustomed to using “Brookside” rather than “Thatcher Brook.” Schoolcraft said staff received new T-shirts at the start of the year with “Brookside Primary School” and the message “We stick together” printed on them. Before February break, the annual spirit wear orders were due from families offering a simple updated design on navy-blue T-shirts, hoodies and sweatpants with gold lettering bearing the new school name. In future years, Schoolcraft said she imagines the design will get embellished with student-created art as former TBPS swag had. Like many things this year given COVID-19, the initial design was kept simple, she said.

But the transformation brings with it more than just a new sign, shirts and labels. School leaders, staff and students are aware of the reasons behind the shift, the principals said, and it’s become part of the learning they hope will continue at the school.

A plaque will be hung in the main entryway to commemorate the change. The principals acknowledge that the motivation behind it fit in with the school district’s commitment to self-examination and goal to make anti-racism a focus going forward.