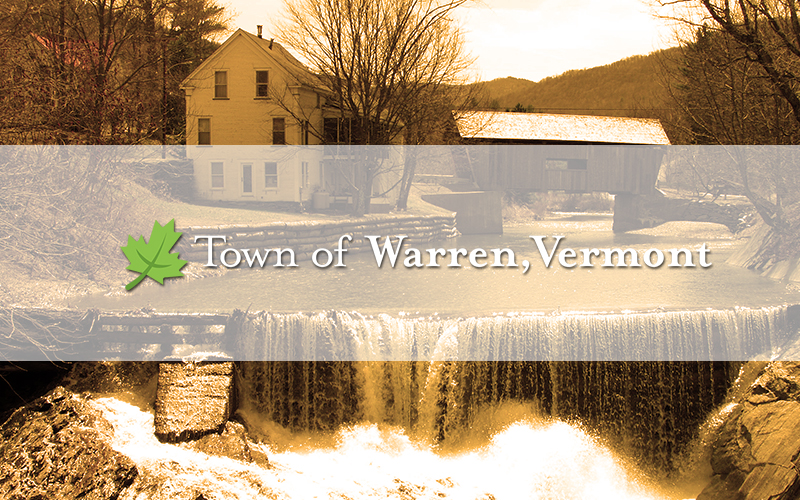 Warren’s current land use and development regulations (LUDRs) were adopted in 2001 with few minor amendments made over the past 21 years. The 2019 Warren Town Plan identified the need for a comprehensive review of and amendments to the town’s LUDRs. “This process is to make sure [LUDRs are] aligned with the Town Plan,” zoning administrator Ruth Robbins said.

Though the pandemic disrupted the planning commission’s ability to host a series of in-person public meetings to present the draft changes to the public and receive comments, it created a series of videos and handouts to explain the changes and has taken more than 30 pages of public comments into account when revising the town’s LUDRs. All videos and related documents can be found at planning.warrenvt.org.

On Monday, March 14, the planning commission heard residents’ comments on the final draft of the LUDRs. Nearly 75 people attended the meeting on Zoom and a dozen or so people attended in person at the town hall. Warren residents spoke passionately about the changes laid out in a 232-page draft of LUDRs and how those changes would impact their properties. “This isn’t meant to be a discussion. We’re here to accept comments,” planning commission chair Jim Sanford said.

Consultant Brandy Saxton of Place Sense, based in Windsor, and an associate were present on Zoom. Resident Butch Hartshorn questioned where the consultants were from and whether they were familiar with zoning in rural towns and Warren specifically. They assured him that they had worked in more than 40 towns in Vermont and had toured the area several times.

He accused the planning commission of drafting the new LUDRs “behind closed doors,” though was told the planning commission had held several remote public meetings and taken extensive public comments into consideration. “The new zoning is too restrictive as far as lot size,” he said. “I’d like to see if left alone. Fifty percent of the town is already conserved.” (Conservation commission member George Schenk later corrected him, saying that 34% of the town land is conserved.)

Virginia Roth said that 112 acres of her residential property that abuts the National Forest land would be rezoned under the proposed changes into a resource protection zone. “There is sufficient land in the area for wildlife corridors,” she said. “I propose [my land] be in a 5-acre rural land. My hope is that the planning commission will listen to landowners, taxpayers and voters.”

One of the changes the new LUDRs would make is reclassifying residential and rural land, which would change the size of some lots from 5-acres to 1-acre plots of land that would free up areas for affordable housing. “I’m here to request the planning commission consider the north side of Dump Road be rural designated with 5-acre lots, not 1 acre to preserve wildlife areas,” Lexi Leacock said. “We all know we live in a wildlife corridor. I absolutely recognize that Warren needs more housing, but I question that being done on Dump Road,” citing steep grade and heavy traffic in the area.

“Dump Road can’t handle more traffic than it has,” Kate Miller added. “If you put more houses on that road” she feared traffic would worsen.

“I don’t see how we maintain rural Warren “if it looks like Williston,” Gene Bifano said. “There’s nothing in here that preserves trees. If we’re looking at maintaining our environment, we have to protect trees. If we allow housing on roads that can’t handle the traffic, we need to pave roads. It is like New Jersey or New York. We didn’t come here to live there.”

While many residents were concerned with the rezoning of their properties, George Schenk spoke in favor of preserving wildlife habitats. “I serve on the Warren Conservation Commission. We’re enormously concerned about changes to the environment that are degrading wildlife,” he said. “The conservation commission was built for the town to help identify the town’s natural heritage and to help advocate for conserving it. If we don’t get this right now, we run the risk of breaking the ecological foundation of this community. The goal, it strikes me, is to find some kind of balance between what animals need and what we need. The conservation commission is working to identify critical habitats.”

“My concern is that infrastructure was not considered when we considered zoning and that puts our water resources at risk over time,” Amy Polaczyk said.

Joe Hanley spoke about concerns regarding the zoning map changing the subdivision of Lincoln Peak, where he and his wife live at the top of Sugarbush Access Road, to include resort mixed-use zoning. “That wouldn’t be appropriate. We don’t have the infrastructure capacity,” he said, noting that their subdivision is made up of single-family housing. “I’m assuming it was an oversight and ask if that could be corrected,” he said.

Stan Walker said he had submitted 56 comments to the draft plan. “There are times you can overdevelop,” he said. “Look at Warren Falls. That was a wonderful place … now look what’s happened.” He spoke of concerns with new 40-foot setbacks for interior lots, as well as the number of parcels that would be designated for 1-acre lots. “We’re trying to put in affordable housing. If you add 40-foot setbacks, where are you going to build? I don’t believe some of these things are supporting our Town Plan. What makes this community great is the rural atmosphere.”

Dorothy Tod lives in a flood zone and said, “My entire existence is going to be illegal due to the base flood level. I don’t know what I’d have to do to be legal.” Zoning administrator Ruth Robbins clarified that her property would be considered pre-existing nonconforming and the concern would be someone building a new property in a flood zone. She explained anyone with a mortgage in a flood zone would be required to pay flood insurance. “That’s true in the existing regulations,” consultant Brandy Saxton and her associate said. “There’s no change.”

“I can’t believe the select board is going to vote on this and the rest of us have to do what they say,” said one concerned resident.