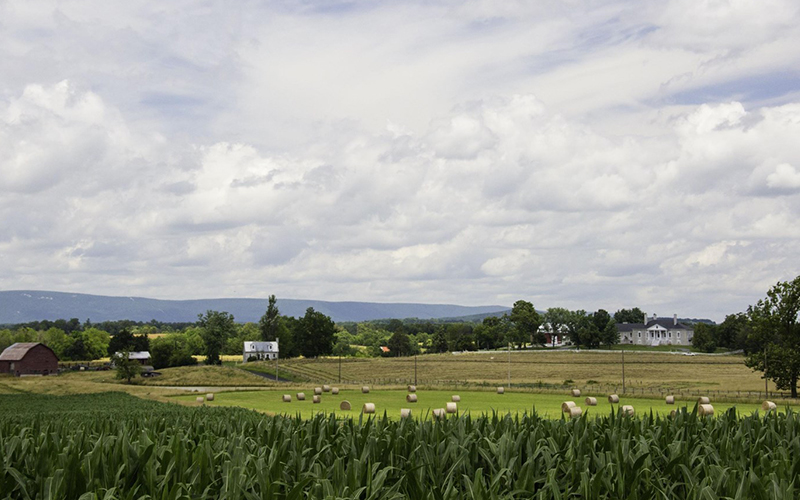 At Louisa, Virginia, I studied two plaques on the grounds of the county court house. One notes that Patrick Henry’s political career began during a three-year stay here. The other recounts the public service of John Mercer Langston (named in the first essay of this series). Son of Ralph Quarles, a plantation owner, and Lucy Langston, an enslaved woman, Langston was the first African-American to be popularly elected to public office (Ohio, 1855). During the war, he recruited regiments for the Union. Later he founded and became the first dean of Howard University’s Law Department. U.S. ministerial appointments followed. In 1888, Langston became the first Black member of Congress elected from Virginia.

Trevilian Station, a pre-war railroad depot, is rotting away in downtown Louisa. I followed a road paralleling the tracks 5 miles out of town to reach the 1864 Trevilian Station battlefield. There must have been nothing there but open fields at the time, as that was an all-cavalry action, the bloodiest such of the war. Currently there are three small businesses but no houses here.

A United States Sharpshooters regiment that included Waitsfield men was present at Spotsylvania, as were Vermont’s Old Brigade plus the 10th and 17th Vermont Regiments.

Eight Waitsfield men had enlisted in Company H of the Second Regiment, U.S. Sharpshooters which served with the Second Army Corps under Major General Winfield Scott Hancock. In the Battle of the Wilderness at the beginning of the Overland Campaign, three of those eight became casualties in their very first battle: James L. Maynard and George M. Jones were killed in action, and Eugene Joslyn was wounded. The others (Leonard C. Berry, Holland Jones, Thomas T. Prentis, John R. Richardson and Loren S. Richardson) continued on toward Spotsylvania.

At Spotsylvania I walked the “Bloody Angle” portion of this May 12,1864, battlefield. (Men of both armies coined that name after the battle, and it stuck.) Technically, the “angle” was a Confederate salient, that is a bulge in its battle line. Fighting here degenerated into a close-quarters slugfest involving thousands. Hand-to-hand fighting at this position was extraordinarily fierce and continued nonstop for 22 hours amidst torrential rain. Casualty estimates for the two armies combined range from 26,000 to 30,000.

Following Spotsylvania, as Union forces sidled left in their approach to Petersburg and then Richmond, Loren Richardson was wounded on June 1 and Leonard Berry on June 16. Berry spent the next three months in a D.C. hospital. It seems that Holland Jones was taken seriously ill about this time, as he was transferred to the Veterans Reserve Corps before being discharged for disability.

My intention was to proceed to Middletown, Virginia. Many Vermonters know of our state’s contribution to Union victory on the Cedar Creek battlefield in this Shenandoah Valley town, culminating a month-long campaign to drive a Confederate army under Jubal Early from the valley. My plan went awry when I misread a state highway sign, putting me onto a road that descended about 15 miles at a 9-degree grade. That road had a great many switchbacks but no place to pull over, so I wasn’t able to reverse my route. I ended at a crossroads at Wardensville, West Virginia, where I got directions for a short cut back into Virginia.

Coming back through Winchester, Virginia, I drove south on Route 11 (Valley Pike) to reach the Cedar Creek battlefield.  It was drizzling rain as I read several roadside markers, including the newest one, a Sesquicentennial tribute to the Eighth Vermont Volunteer Infantry Regiment.  Howard Coffin, Vermont’s best-known Civil War historian, gave a dedicatory speech on that occasion. There’s also a monument to the Eighth in the woods where that regiment first engaged Early’s men.

On October 19, 1864, at 5 o’clock in the morning, in complete darkness, the Eighth Vermont rushed to confront Early’s force that had taken the Union camp by surprise. (Their action probably qualified as a “forlorn hope.”) The Eighth took 110 casualties of 164 men engaged. Nevertheless, what was left of the regiment led the afternoon counterattack ordered by Phil Sheridan.