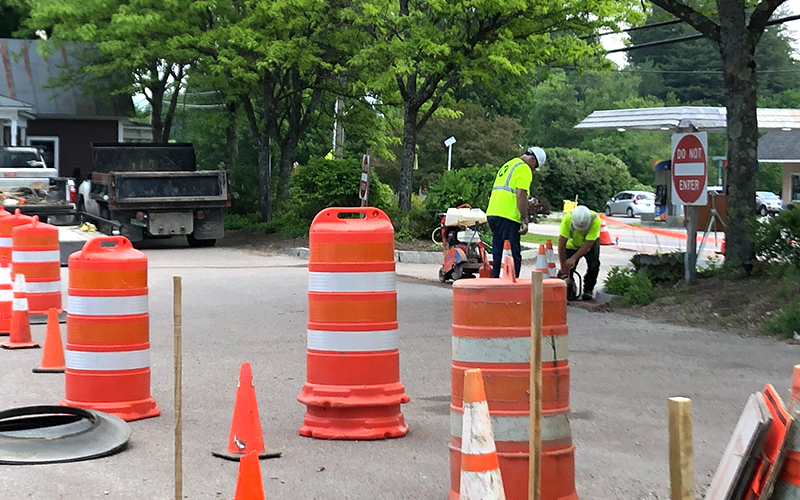 Work got underway this week to change the southbound-only ingress for the Irasville Country Store to a north/southbound ingress, ending a four decades long legal fight.

The Waitsfield Development Review Board, in a February 7 decision, reversed the town’s 41-year-old position on the store’s Route 100 access, finding that two-way ingress would improve pedestrian safety and that the construction of the town’s sidewalk in 2013 changed the conditions since the original permitting/legal battles.

The store’s access from Route 100 has been the subject of legal battles since 1981 when the Waitsfield Board of Adjustment granted storeowners Tom and Cheryl Kaminski a permit that allowed access only from the Slow Road. The town’s reasoning at the time hinged on the Town Plan in effect in 1981 which noted: “It is recommended that the use of the westerly Slow Road be encouraged” and that “new access permits should be prohibited and limited and present curb cuts eliminated where possible.”

The board (subsequently replaced by the town development review board) found that the proposed project would adversely affect the capacity of existing community facilities, traffic on the roads and highways in the vicinity and would be contrary to the Town Plan.

The Kaminskis applied for southbound access in 1982 and 1983 – both applications were denied. They appealed in Superior Court and lost in a 1984 decision. In 1987, they again applied for southbound access citing “extreme hardship,” due to the fact that the convenience store across Route 100 had two ingress/egresses from Route 100. (That store predates the Kaminskis’ store and shares those accesses with the Village Square Shopping Center.)

That permit was denied and the owners again appealed in Superior Court where the court ruled in their favor, noting that the plan in that application differed from previous proposals. The one-way southbound access was built in 1987 with a deceleration lane.

Last October Tom Kaminski came back to the town development review board seeking two-way ingress from Route 100 and included a traffic study. Last month Kaminski resubmitted that application and the DRB heard it on January 25.

Kaminski and his engineer Roger Dickinson pointed out that people frequently turn into the Route 100 access when traveling northbound and also suggested that creating two-way Route 100 access with 90-degree turns would allow the access to be narrowed significantly. That would mean that pedestrians would need to cross a shorter span of pavement as they walked from one side of the ingress to the other. That span would be reduced from 30 to 20 feet.

Kaminski and his engineer argued that the construction of the town sidewalk in 2013 changed the existing ingress materially by removing the deceleration lane. They further argued that a perpendicular ingress would slow drivers as they enter the parking lot which will also improve pedestrian safety. Finally, they argued that no other businesses along the Route 100 commercial corridor have similarly restricted access and said that businesses whose customers can turn left into them do not have unsafe traffic issues.

The DRB concurred. The new permit requires all deliveries are made from the Slow Road and required signage noting that egress onto Route 100 from the store is strictly prohibited. Should motorists exit the store that way, additional signage will be required.