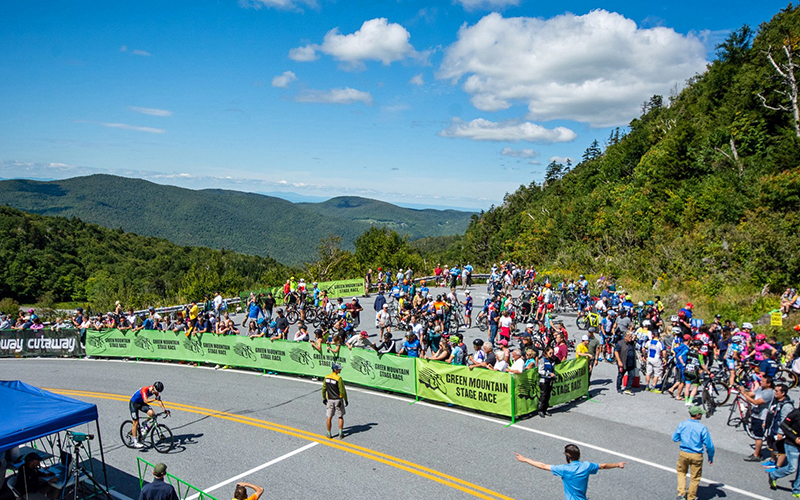 The 21st Green Mountain Stage Race starts this Friday, September 2. Registration was not quite closed as The Valley Reporter went to press.

According to race director Gary Kessler, the event had strong early registration this year, and more racers were expected to sign-up in the final days. The GMSR brings over 500 racers along with their family members, friends, and coaches to the Mad River Valley where they stay for four nights and four days of racing. Overall, 1,000-1,200 racers and race supporters stream into the area from around the U.S., Canada, the UK, and the Caribbean.

“While here they rent lodging, go out to eat, buy food and gas and generally enjoy all that the MRV has to offer. As of this writing 32 U.S. states plus the District of Columbia are represented at the race. Five Canadian provinces including a mother/daughter team coming from Whitehorse in the Yukon Territory as well as racers from Bermuda and Mexico will be competing. There were some additional teams from South America that planned to attend but COVID and visa issues kept them away once again this year,” Kessler said.

“We have a topnotch junior field with racers coming from as far as California and Colorado. With at least one Junior National Champion participating. Also registered is the reigning U.S. men’s Pro National Champion Kyle Murphy,” he added.

The GMSR will have four stages this year with two of them in the Mad River Valley. Stage 1 the Warren Individual Time Trial will take place starting in Warren Village at 8:30 a.m. on Friday. Time trials are also known as the “race of truth” as each racer must complete the course as fast as they can without the benefit of drafting other racers or using their team for assistance. The GMSR TT course is challenging with a little bit of everything including climbing, rolling sections and few downhills as well as a trip through the “dip” in the last kilometer ending with a very painful 500M climb to the top of the dip to the finish at the Common Road intersection. It favors strong all-around racers. The stage will wrap up in the early afternoon.

On Saturday is the Stage 2 Randolph Circuit Race which will take place in Randolph starting at the high school and finishing at Ayer’s Brook Goat Dairy a short walk or shuttle bus from the school on Route 12. Kessler said that this course is relatively flat for Vermont with racers competing on a 37-mile loop. Most fields will ride two laps for 74 miles of racing, but the Pro men will race three laps for 111 miles. Last year they averaged over 28 mph for the race. There are sprints at the finish line each lap as well as a mid-lap sprint. There is also a King/Queen of the Mountains climbing sprints on each lap in the Brookfield Gulf.

Sunday is the Bioracer Mad River Road Race, which is considered the “Queen Stage” of the event. The race starts at Mt. Ellen and travels over the Middlebury Gap, on Rt 116 into Bristol finishing at the summit of the Appalachian Gap. This is a 65-mile loop which is what most racers will ride, but the men’s pro field will race an additional 11-mile loop this year climbing the newly paved Sugarbush Access Road and turning onto German Flats Road prior to taking on the main 65-mile course. There will be a King of the Mountains sprint for the Pro men at Alpine Options.

“This is the stage that all climbers dream of winning on the top of the App Gap with supporters cheering them to victory. Spectators are encouraged to come early to chalk the road and cheer the racers on, Kessler said.

Shuttle buses will bring spectators from the Mad River Glen parking area to the summit starting at 10 a.m. and Route 17 is closed in both directions from 10:45 to 2:15 on Sunday.

Monday brings the Burlington Criterium, which takes place in downtown Burlington. A Criterium consists of a loop of less than 1 mile that is raced for multiple laps. The Burlington Crit is 1K (0.61 miles) around the closed streets of downtown Burlington. The race starts on Main Street at the Flynn and races on Church Street, College Street, St. Paul Street, Bank Street, and Pine Street. Racers will race between 25 and 40 laps. These races are done at nearly top speed with the pro men completing the 31 miles in about an hour. The Burlington crit course featuring six turns including both left and right. It is like a NASCAR race with 100-plus racers fighting for position. To make it even more entertaining there are sprints on certain laps for prize money and points in the race. This ups the speed even further. The public is invited to come see the action and cheer the racers starting at 8:30 and ending at 5.

The GMSR also hosts a kids’ event during the Criterium. There are two kids’ rides for 7- to 9-year-old and 10-to-12-year-old. The event starts at 12:10 and the kids will ride on the closed streets of Burlington. Entry is free! Online registration is closed, but parents can register in person in Burlington on Monday.

Volunteers are still needed! Those who can help, are asked to email This email address is being protected from spambots. You need JavaScript enabled to view it. or call 496-5415 for more information. Volunteers are treated to an event T-shirt and a fun volunteer dinner post-race.

There will be several road closures to help make the GMSR as safe as possible. The first will be on Friday on Flat Iron Road starting at 8 and reopening once the race is completed mid-afternoon. The second closure is of Route. 17 about 200 yards east of the summit on the east side and continues west to the Gore Road intersection from 10:45 to 2:15.