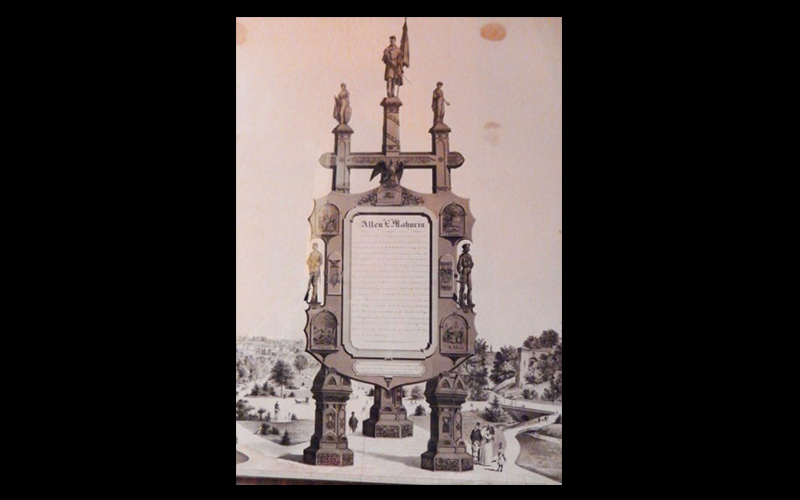 The Fayston town clerk, Patti Lewis, Brooke Cunningham with her many cameras, and I met in the Fayston Town Hall. This is where the Historical Society of Fayston keeps its artifacts. We were awaiting the arrival of the past president, Zelda LaVanway, and we greeted her when she got there.

Patti: Zelda, Kathy’s going to tell you what she’s trying to do here.

Me: Zelda, take a look at this. (I show her the heavy framed document I had brought with me.) I read somewhere that out of 800 people who lived in Fayston during the Civil War, 64 men enlisted in the Union Army! I brought this document with me because I noticed online that you have another one here in your display cabinet.

Ours is for Allen Ebenezer Mehuron. Written in the interior, by hand, it says, “Enlisted from Fayston, Vt., Sept. 27, 61 and entered into U.S. service at Montpelier, Oct, 15th 1861.” And it tells the major battles he fought in. Including the Battle of Antietam. I’m not really much of a history buff, but that name rang a bell. When I looked it up, I found it was the deadliest one-day battle in American history. They say it showed that the Union could stand against the Confederate army in the East. Also, winning the battle gave President Abraham Lincoln the confidence to issue the preliminary Emancipation Proclamation. It gives me goosebumps to think about it.

Zelda: And I know where there’s another document like that. My great, great, great Uncle Otis Cole. Corrine Moulton has it. She’s also related to me.

Me: You’re related to everyone.

Zelda: (She laughed.) I hope that’s not true. But they say if you live in one place for four generations you are related to everyone.

He died in Anderson Prison. A prisoner of war.

Me: Anderson Prison? What’s that?

Zelda: You don’t know about Anderson prison? Well, you better go home and study then. That was a horrible place.

I did just that. According to history.com, Andersonville, Georgia, served as the site of a notorious Confederate military prison -- officially called Camp Sumter. It was the South’s largest prison for captured Union soldiers and known for its unhealthy conditions and high death rate. Approximately 13,000 Union prisoners were housed there.

Patti: “Zelda, do you recall the story behind those documents, why they were being produced?”

Zelda: It was a scam. This was a scam. They said they were going to build the monument in the picture and have all the people’s names on it, if you bought one of these things. People that had no money in the world then, like in Fayston, they had nothing. They bought one and this is what they got for contributing. It never got built. But the veterans of the Civil War wanted their name on a monument if they could.

(It struck me that it was Margarette Maxwell Mehuron who purchased our family’s document for her husband. They had a farm out across the Pine Brook covered bridge on the North Road. How long would it have taken her to save the money?)

Brooke: Those are large photographs. Pictures like that were not an easy thing to produce back then.

Patti: They produced them but never did produce the monument.

In their display case in the Fayston Town Hall, the Fayston Historical Society also has a wooden mail sorter from the old post office. One of the town elders when I first moved here in the 80s, Henry Perkins, bought it and gave it to them.

Zelda: The post office was the house right next to mine. The Levys live there now. When the RFD (rural free delivery) started, the post office closed that very day.

Brooke: Out of all the things you have here, what’s one story that people would want to know?

Zelda: The story about this scythe. I have to believe that it’s true because the people that owned the land this was found on told me. This fellow got sick of hearing about the Civil War and he ran off and joined up. He never did come back. They tell me it was a Wheeler; I cannot find for sure any Wheeler it might have been.

While walking the North Fayston loop weeks later, I ran into Mike Quenneville driving a tractor. He stopped and said, “I just now remembered that you called me asking about the scythe tree. It was up by the first town gravel pit. We knew the tree was dying. I went up to check on it, but Kevin Warren had beat me to it. He cut it down and saved the branch and scythe. I went to his house and told him the scythe should probably go in the municipal building. We brought it to Zelda, and she took care of it. Hey, but tell your readers Bragg Hill has a scythe tree too. And there are others. Tell them when they are out walking in the woods to look real close. We still have some.”

(Thanks to a Waitsfield Telecom history insert about Fayston)

“…many young men did respond to the call and left Fayston for the Army. One such man, a farm boy from North Fayston was working in the fields when he learned of the need for soldiers. He left the meadow where he was working, leaving his scythe resting in the crook of a nearby beech tree. It is assumed that the young man never returned, and his scythe remained hanging in the tree, an unintended memorial to Fayston’s Union soldiers. The tree grew, eventually to wrap the metal blade in growing wood, as if holding on to the memory of the young farm boy turned soldier.”

Zelda has recently stepped down from running the Fayston Historical Society. She’s getting older and is cutting back, it’s as simple as that. The same thing is happening to the boards of Warren and Waitsfield. Moretown is struggling as well. It’s true that nationwide volunteerism overall is in decline. But according to a writer for the American Association for State and Local History there’s another element in play. “Historical Societies have had a strong run since the beginning of the 20th century but have found it hard to do two things: find new board members and attract young families. The running joke is that local societies have always been run by ‘little old ladies in white tennis shoes.’”

And aren’t we lucky to have had them?

But it’s time for younger folks to step up. Reinvent and rebrand our organizations who preserve our public history. The Mad River Valley has a rich one that must be preserved. I’m sure we can all agree to that. If you are interested in serving you can call the town clerks of Fayston and Warren and find the Waitsfield and Moretown Historical Society online.

Zelda and Patti, you were wonderful to take time out of your day to teach us some history. Thanks for taking us back!

You can contact me with story ideas at This email address is being protected from spambots. You need JavaScript enabled to view it..

Mary Kathleen Mehuron lives in Waitsfield and after a career of teaching mathematics, writes novels. She is in pre-production for her third book, “The Belonger,” which will be released next year. It will be followed six months later by her fourth, “S. Beach Drag.”