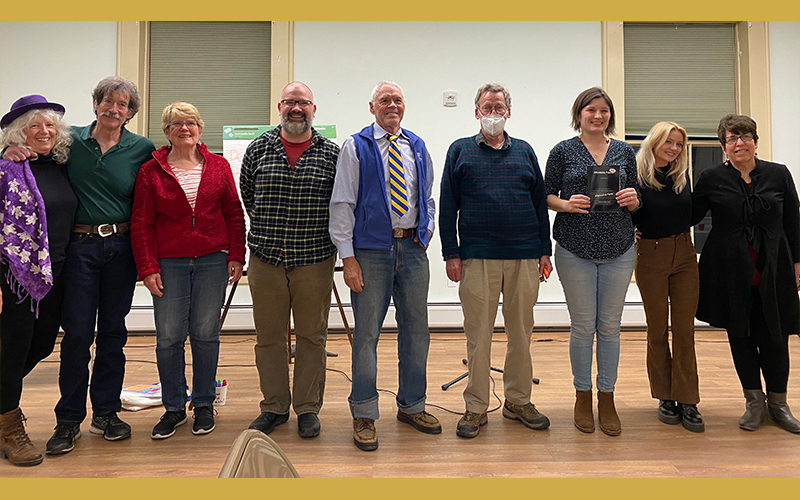 The evening of Friday, April 29, saw a group of eight Vermont poets and more than a dozen listeners meet for a convivial poetry reading at the Waitsfield United Church of Christ.

The poetry slam was part of Joslin, Warren and Moretown libraries’ participation in the Vermont Humanities Council’s “Vermont Reads” program. This year’s book selection was the Young Adult novel “We Contain Multitudes” by Sarah Henstra, “an exhilarating and emotional novel about the growing relationship between two teenage boys told through the letters they write to one another” (Little, Brown). The novel features poetry heavily, particularly Walt Whitman’s “Leaves of Grass,” as a medium to forge a connection between the two main characters.

The poetry slam was streamed on radio station, WMRW, by the church’s reverend, Mark Wilson. There was lemonade and seltzer in the church basement, where the space gradually filled with warm conversation. Before things began, there were shout-outs to librarians from each town who helped organize the event.

Geof Hewitt, the ‘slam master,’ helped break the ice, cracking jokes and making everyone feel comfortable. Hewitt began by introducing the judges, five randomly selected members of the audience, who would be in charge of giving the poems a score from 0.1 – 10.0, making sure to emphasize that decimals were included in the scoring. He continued to read the rules of poetry slam from “Hewitt’s Guide to Slam Poetry and Poetry Slam,” which he said he was selling “from the trunk of [his] car.”

Next, Hewitt announced that Amanda Gates, youth services librarian from Warren who helped set up the event, would be the first “sacrificial” poet; after she read a poem, the judges would practice scoring, and they did the same with the second sacrificial poet – Hewitt himself.

After this, the poetry slam began. Poets were allowed to read original work or perform covers, whichever they chose. There was an even mix of both, with original work covering topics such as young love, war, nature, and dogs. Covered poems included Billy Collins’ “Forgetfulness,” Wendell Berry’s “Manifesto: The Mad Farmer Liberation Front,” “The Cinnamon Peeler” by Michael Ondaatje and Robert Service’s “The Cremation of Sam McGee.”

After the first round of poems, The Valley Reporter’s Erika Nichols-Frazer held the highest score, and Hewitt announced a second round for each poet. There was some scrambling for a second poem, as Hewitt had made a spontaneous decision. He offered up his own poems to be read, which one poet did accept.

Nevertheless, each poet found something to read, some reading from their phones and others from the poetry books they brought with them. In the end Nichols-Frazer won and was gifted a copy of Hewitt’s chapbook, “Affordable Poems, Alternative Facts.”

Afterward, words of encouragement, congratulations, and gratitude were shared between poets and listeners, and as the crowd dispersed, there wasn’t a frown to be seen.