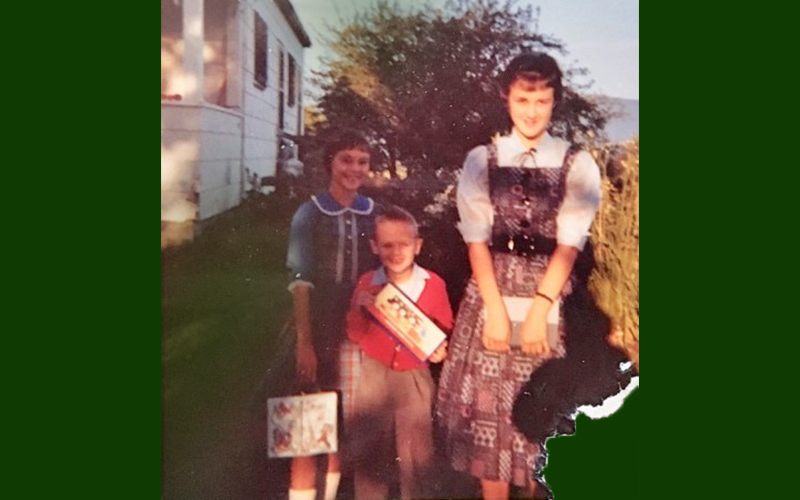 Randy on his first day of school.

By Randy Graves of Warren as told to Mary Kathleen Mehuron

I had one college roommate for three years before he decided to move to an apartment off campus. We had become really good friends without really working at it much. We had some things in common; our major for example. And some things which were decidedly not. He was from western New Jersey and I from a small dairy farm in central Vermont. He had a strong conservative streak politically and I, being the 1970s, had been to my share of Vietnam War protests. But for those illustrative college years we were, for the most part, best friends. Which is why he came home with me one Sunday to have a home-cooked dinner and, of course, do laundry.

It’s a very safe guess, some 40-plus years later, to say that my mother had a pot roast ready for Sunday dinner. We sat around the smallish breakfast/dinner table and enjoyed not being in a college dining hall on a Sunday. My roomie barely said two words which was somewhat out of the ordinary. I didn’t think much of it until the ride back to school when I asked if he had been okay with the visit with my parents. Yes, the meal was great. My mother insisted on washing and folding his laundry as well as mine. That was great too. But he eventually and with some embarrassment admitted to me that, “I could not understand your father much of the time.” Ah. Ok. The old Vermont accent. Got it.

For many years I worked on not having that oh-so-embarrassing and revealing Vermont accent. If you grew up on a dairy farm, there were two things you worried about all the time when you went to school or Sunday school or a friend’s birthday party. One, you never wanted to smell “like the barn,” meaning you never wanted to smell like cow manure. Even if most of your friends were farmers too. Two, patched clothes were a statement and not one of high fashion at that point. Nor were pants well above your ankle which you had clearly outgrown. I had a third worry. I did not want to sound like a hayseed, so I worked very hard to get rid of that thick accent. For the most part, I succeeded but there are still a couple of words and a couple of phrases that I just never succeeded in un-learning. In the interest of full disclosure here is a very short list -- with definitions where needed -- of those pesky “Vermont-isms” (beyond the standard “ahyup” and “nope”) that I have learned to live with.

A Primer: First things first and this is basic Vermont 101 language arts. I suppose in the interest of Yankee frugality, Vermonters take the liberty of shortening multi-syllable words. Preferably to one syllable. For whatever reason we also enjoy making one syllable words into two syllables. Mostly, just to keep those people from away on their toes. Vermonters like to keep their jaws tight and lips close when they talk. We long ago replaced the “f”-bomb with “friggin” and the state bird is “jeezum-crow’. Go figger.

V’mont: The 14th state and its own Republic before it became a state. Almost one syllable. Work on it.

Grage: A one syllable word which is the structure where a person might pawk their vehicle. Most Vermonters don’t have them. (don hav’em) If you do not have a grage, then you park your car in the …

Dooryard: I did not realize this was such a strange term for a very long time. It’s the area right in front of your front door (which is always the kitchen door) where you now never need to mow in the summer because it is where you pawk your car or truck (sno-sheen or tractor) because you are not wealthy enough yet to build a grage.

Sno-sheen: This a winter over the snow vehicle and is often pawked in the dooryard year ‘round.

Barnyard:  You do not really need my help on this one. God help you if you do.

Ruff: That would be the top-most part of the house or grage or barn that keeps the weather out. You know … “I need to go up on the ruff to adjust the TV antenna.”

Suppa: The last big meal of the day and depending on the family eaten either before or after chores and milking.

Dinner-pail: AKA lunch-pail. For each new school year my mother would buy me a new lunch pail. It was always a complete unknown how long I could actually carry the new thermos before I dropped it and the glass broke. I never made it past late fall.

Cree-Mee: Vermonters are famous for more than Ben and Jerry and Bernie. Only state in the union where soft-serve is not “soft-serve” or “Carvel”, or “Dairy-Queen’ …. it’s CREE-MEE. And it better be maple and it better be the real thing.

Grinder: OK. I will admit that the lines get blurred on this one. It’s a long sandwich not made with sliced bread. AKA -- A “Sub,” “Submarine,” or “Hoagie,” or an “Italian.” But none of those are sold in VT. We sell grinders. Sorry.

Syrup: As in maple. Never ever any of that other – expletive -- that is maple flavored. Ever order a “salmon-flavored” piece of fish for dinner? BTW -- It is not pronounced “seer-up.” Get it right, folks! And it is a very silent “p” at the end and as close to the “one syllable” rule as possible. “Sirup”. We support fellow farmers and sugarmakers, so it needs to be consumed regularly and creatively. I have seen my dad pour maple syrup (practice it) on: apple pie, pumpkin pie, mince pie, cottage cheese, pudding, any flavor of ice cream, hot cereal, cold cereal, coffee and his personal favorite, just straight up in a bowl listening to the Sawx game on ‘DEV.

Thatnuf: Asked as a question. A Vermonter is asking if you have had enough to eat or if you have enough maple syrup on your cottage cheese, or simply if the conversation is over and you need to go.

Dungarees: Cowboys innovated blue jeans. If you are really into it, a pair of coveralls does the job well. But, if you grew up on a dairy farm you grew up working with ____?? You guessed it! At some point during the day, you are going to move … dung. Do I have to explain more?

That’s enough for now. Back to my poor college roommate.

My father’s Vermont accent was thick. After the first visit back home with me, I became my father’s official but secret “translator.” My roommate would give me an “eye-sign,” like “I have no clue what your dad just asked me” and I would without missing a beat, translate. Before both my parents passed, I did the same for my wife at family gatherings and functions. Even then when we would get together as a family, I could hear myself gently slide back into the accented speech of my youth.

Eventually though, I realized how silly I had been. And horribly vain. I became ashamed of myself for being ashamed of my own heritage. Now (which, BTW, if you work on it can almost become two syllables) I let it fly with pride.