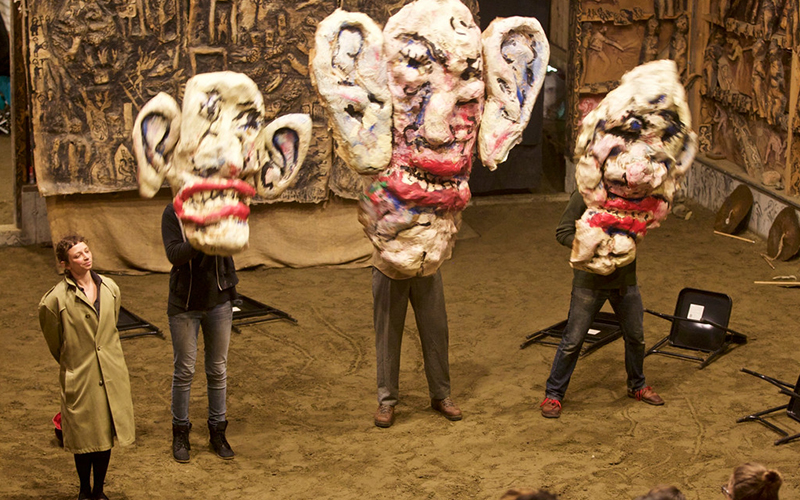 For many, a Vermont summer is incomplete without a Sunday pilgrimage to see Bread & Puppet Theater perform its circus in the amphitheater in the rolling fields of the one-time dairy farm in Glover.

That Bread & Puppet also performs a changing program of new shows in various formats on Friday evenings during the summer months is less known. These Friday evening performances play a vital part in Bread & Puppet's development of new work, and give local audiences a first opportunity to experience the great variety of productions that B&P may tour domestically and internationally in the year ahead.

Bread & Puppet will premier one such new show, “University of Majd,” this August. Majd Ziadeh, a young Palestinian man, was detained at age 19 with all the other men in his building, tortured, sentenced to 30 years in an Israeli military prison in 2002. Thanks to the work of lawyers and activists, his sentence was commuted and he was released earlier this year. “University” highlights the conditions that allowed for Majd's unjust imprisonment, and celebrates his release.

The play draws its title from the fact that many Palestinians refer to time spent in Israeli prisons, with dark irony, as "University," a grim rite of passage for a significant percentage of young Palestinians.

“University of Majd” will play Friday evenings this August at 6:30 p.m. outside The Paper Maché Cathedral at Bread & Puppet Theater.

In addition, Bread & Puppet's “Apocalypse Defiance Circus” continues on Sundays through the end of August, with one last show Saturday, September 3. All Circuses are performed at 3 p.m., preceded by sideshows at 2 p.m. The show continues to evolve, so repeat viewings can be rewarding!

Admission for all shows is by donation, no one turned away for lack of funds. Donations can also be made in advance at www.breadandpuppet.org.

“University of Majd” plays Friday evenings in August at 6:30 p.m. “The Apocalypse Defiance Circus” plays at 3 p.m. (sideshows at 2 p.m.) every Sunday through August 28, with a special last performance Saturday, September 3, at 3 p.m. All shows at the Bread & Puppet Farm, 753 Heights Rd/Rt. 122 in Glover, VT. More info and ticketing at www.breadandpuppet.org.