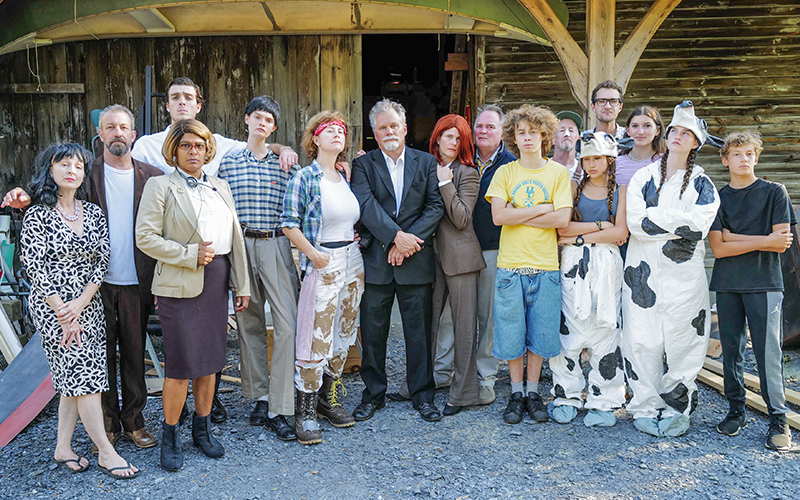 The beloved Crispy Pork Gang returned to Phantom Theater in Warren last weekend for their original parody of the HBO show “Succession.” The gang is a group of writers and performers, most of whom have been gracing the Phantom stage roughly since its inception in 1985. The show featured many seasoned Phantom actors as well as a few newbies. The ‘gang’ is known for its recent adaptations of the films “Jaws” and “Alien” and did not disappoint with their latest comedic adaptation.

L.A.-based writer and performer Jeanne Darst (who also wrote the gang’s pre-pandemic adaptation of “Jaws”) penned the hilarious script that spoofs the popular TV drama based on the media mogul Rupert Murdoch and his overprivileged family. In addition to the script, Darst brings the laughs as Doris Beaver, a Vermont dairy farmer who’s resistant to rich flatlanders buying her family farm, the Creamy Beaver. Patriarch Logan Roy, played by Phantom newcomer Peter Hastings, challenges his greedy offspring to secure the acquisition of the Creamy Beaver in order to inherit the company. The lactose-intolerant family wants to transform the farm into an oat milk farm (they’ll train the cows to make oat milk, of course). The Beavers are resistant and even squirt playboy Bendall Roy, played by Ben Schneider, in the eye with milk directly from an udder.

Original musical performances of songs such as “Creamy Beaver” and “Let Me Have a Weak Password, God Damn It,” amplify the fun. The parody pokes gentle fun at outsiders as well as offering inside jokes about Warren establishments such as the Pitcher Inn (which they rename “The Richer Inn”) and the East Warren Community Market (“Seventy-five dollars for cashews? Is that a lot?” one character quips). Through trickery, Roman Roy, played by Grier Montgomery, convinces the Beavers’ daughter Harper, played by newcomer and local Scout Vitko, to sell the farm to the greedy Roys. Their oat milk enterprise gives locals “bendy bones” and infuriates the Beavers. Roman has a change of heart and all ends well for the Creamy Beaver.

The Crispy Pork Gang performed “Succession” three times last Friday and Saturday. Despite the heat, many familiar faces filled the house of the Edgcomb Barn that houses the offbeat theater. Next up will be a performance of Keryn Nightingale’s one-woman show on August 14 at 8 p.m. (the first performance was on August 9).