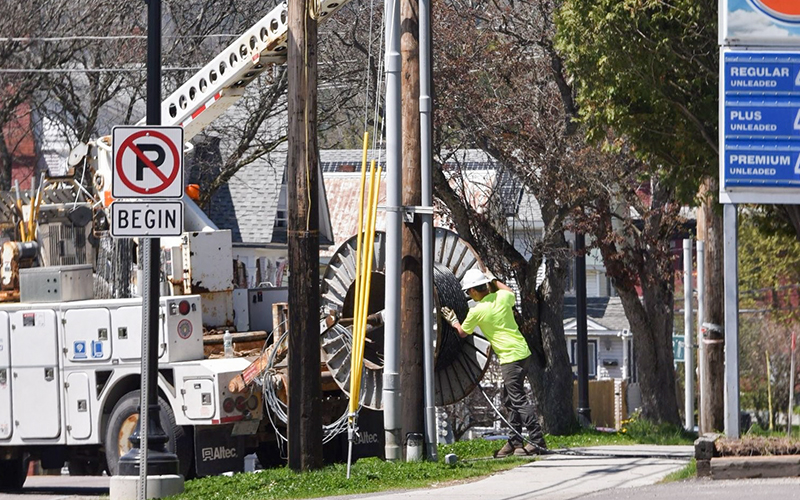 For those keeping track of downtown Waterbury infrastructure, there’s a mix of good news and bad news to report.

In the good column: Stowe Street paving is moving along and a $200,000 state grant was approved to help replace sidewalks on Randall Street and part of Park Row, work town officials are aiming to get done this summer.

The flipside: Work to remove utility lines from a swath of Main Street has taken too long for the final piece of that project – removing the wooden poles and patching the new sidewalks – to happen in 2022.

The latter was confirmed this week by Ken Upmal, Vermont Agency of Transportation project for the now four-year-old Main Street project.

The project calls for burying overhead utility lines for a section of the mile-long project, most of which was completed in 2021. Between the Congregational Church/White Meeting House and the State Office Complex, underground conduit was installed during construction on the $26 million project that rebuilt the street, installed new water and sewer lines, added new sidewalks and lighting. Lines for a variety of power and communications utilities are to be threaded through the conduit leaving the stretch above ground wire-free.

Removing the overhead lines that are attached to traditional wooden “telephone poles” has been a slow, painstaking process, Upmal said, with a number of utility companies needing to work in a particular sequence to remove their lines. That process began last summer when local residents may remember Green Mountain Power crews at work along Main Street. Recently, Consolidated Communications has been busy removing lines.

Scheduling over the past year has been affected at times by weather and staffing issues for the companies, Upmal said. The goal was to be finished by July 1.

“It’s unfortunate,” Upmal said. “But the final contractor – I don’t recall which one it is right now – didn’t get done in time.”

Currently there are no overhead lines along the side of Main Street where the fire station is located. Across the street, a single line stretches from pole to pole along much of the section.

The timing Upmal refers to is the final step which is to activate the last contract to remove the poles and then patch the new sidewalks. The process for that, Upmal said, takes weeks and, at this rate, it could stretch into late fall when conditions for that work would not be ideal.